Our mission is simple, to make sure no other woman or their loved ones who are facing a diagnosis of Small or Large Cell Neuroendocrine Cervical Cancer, ever be alone. We will continue our efforts to support our research fund through MD Anderson Cancer Center in Houston Texas, funding our global tumor registry called NeCTuR, molecular testing for tumors  and  our informational website @ www.necervix.com , so that where there once was nothing but "poor prognosis" to be found when searching for SCCC and LCCC, you now find hope.

Through our social media support group efforts, we intend to spread awareness and the truth about Cervical Cancer, bringing a voice and a face to the 1% who are ignored by the mainstream media.

Approximately 11,000 to 12,000 women will be diagnosed in the U.S. with invasive cervical cancer this year. 99% will be HPV related.  But 1% of those, approximately 200 to 250 women, will be diagnosed with a non-HPV related cervical cancer called Small or Large Cell Neuroendocrine Cervical Cancer. Over 250,000 women worldwide will be diagnosed with invasive cervical cancer and the number for SCCC/LCCC worldwide is unknown.  For these women there will be no slow growing tumor.  There will be no pre-cancerous stage for early warning and detection.  Their tumors will grow to advance stages within  in months or even weeks. It won't usually be caught on a PAP as the screening doesn't look for SCCC or LCCC and unless already advanced it won't be seen. Whether you have HPV or not, whether you have been vaccinated or not, you can still get SCCC/LCCC. Even if your PAP 6 months ago was clear, those symptoms you are experiencing could be SCCC/LCCC. But the mainstream media, cervical cancer and vaccine advocates aren't talking about this....

The #TellTheWholeSTory campaign was born to get the conversation rolling. To get the  mainstream media, cervical cancer and vaccine advocate's to not only tell 99% of the story, but the whole story and include our 1%.  Why?  Because knowledge is power and silence is complicity.  When you lead people to believe you can 100% eradicate a cancer with a vaccine and leave out the information about a rare cancer that although rare, does exist, you aren't telling the whole story.  You aren't even telling the truth. Our message is clear; get vaccinated if you qualify to protect yourself from other cancers, but be diligent with your health.  Make it to your annual well-woman exam EVERY YEAR.  Know the symptoms of cervical cancer and then pay attention.  Listen to your body and what your gut is telling you.  Just because you've been vaccinated, screened negative for HPV and your doctor says you don't need a PAP for a couple of years, doesn't mean you can ignore the irregular bleeding, or the painful intercourse, or the back pain and bloating.  Don't be lulled into a false sense of security.  Go to the doctor because it could be cervical cancer.  It could be SCCC/LCCC.

By starting this campaign we hope to open the door to a conversation.  A conversation of inclusiveness. To be able to talk about everything having to do with cervical cancer from diagnosis, to treatment and to the aftermath of the diagnosis, including the 1% and not excluding any information. So, we are challenging the mainstream media, cervical cancer and vaccine advocates, to include us in their message.  Empower the public with ALL the KNOWLEDGE

SCCC/LCCC is Rare but There!

If you have a story to share please do so and 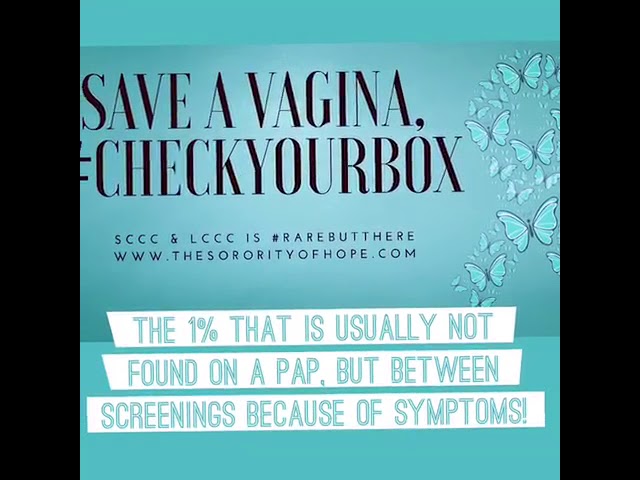 © 2017 The Sorority of Hope SCCC/LCCC Sisterhood -